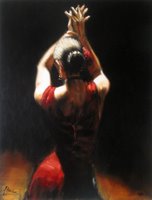 I love Spain.  I love almost everything about it.  The energy, the food, the language, flamenco, the art, architecture, the history, the culture, the TAPAS, etc…  I have had a near obsession with all things Spanish for a very long time.  The first time I set foot on Spanish soil,  it almost seemed like I was home.  I know that is an odd statement,  but it is honestly how I felt.  It was as if I belonged there.  From that moment on,  it has been a long-distance love affair.  Spain is where I truly fell in love with food.

I remember vividly the first time I had tapas.  I was at an outdoor restaurant/tapas bar called Qu-Qu in Barcelona next to one of the main roads.  I still have a paper-wrapped toothpick from there that I keep in my jewelry box.  It’s been 12 or 13 years since that first trip and it left an impression on my soul that I still feel today.  I had never tasted anything like the food I had on that trip and it resonated with me in a way I had never experienced before.  The food was completely foreign to a Midwestern girl from a small town, but reading the menu and ordering things I had never seen or tasted before was exhilarating to me.  I almost felt like I had never really tasted food before.  I remember exactly what I had that day.

(I can’t figure out how to add the proper accents/tildes here, sorry!)

How many meals in your life can you remember every single detail?  I remember the weather,  where I sat, what the restaurant looked like from where I was sitting, the sounds of the traffic outside, etc.  This is worth noting because I don’t always have the best memory…

Having tapas in Spain is a social event.  It starts anywhere from 8:00 to 10:00 at night. People have a drink of some sort and a small snack (tapa), move on to another place and do the same thing. Repeat a few more times before finally having dinner anywhere from 10:00 to sometimes as late as midnight.  Tapas are basically appetizers or “little bites”.  They can be anything from a dish of olives to razor clams or chorizo.  The list of tapas is quite literally endless.  That is part of the excitement of it.  Every region of Spain is so unique and the food is representative of that particular place. Most tapas are accompanied by a glass of wine, but sherry, cava (sparkling wine) or beer are also common.

There are a few regions of Spain that have their own language and culture apart from their national one and some of the regions of Spain are as different from each other as could possibly be.  Spain was occupied by the Moors for almost 800 years until Ferdinand and Isabella took the throne and drove the Moors out in 1492. (does this year sound familiar?…)  This occupation had an everlasting impact on Spain and it’s culture.  The history of this peninsula is fascinating (to a nerd like me) and while I could drone on for hours about it,  this is a food blog…  so back to the topic at hand.

There is a food market in Barcelona called La Boqueria.  It has everything anyone could ever imagine under one roof.  Barcelona is located on the edge of the Mediterranean Sea and thus La Boqueria was swimming! with seafood.  I saw things that I had NO idea what they were, but was completely mesmerized by.

That first trip to Spain was an experience that I will never forget.  Although I haven’t been able to go back for some time now, I carry the memories of Espana with me in my heart right where they belong.
There is a fountain in Barcelona at the beginning of Las Ramblas and it is said that if you drink from that fountain,  you will always return to that place.

I am making the quintessential tapa:  Tortilla Espanola.  There are few ingredients, but the simplicity is part of what makes it so delicious.  This can be eaten warm or at room temp, which is how I prefer it, and it can be made ahead and kept for a couple of days.

– Do not be alarmed by the amount of oil,  you won’t be consuming all of that… 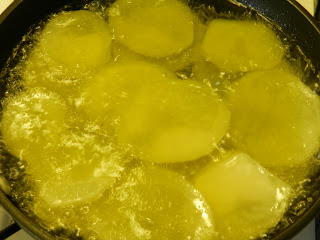 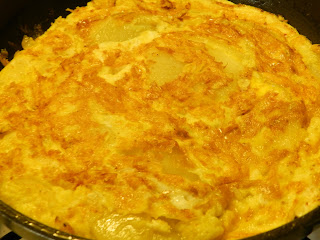 8.  Let the tortilla cook a few more minutes until
you can see that it is completely cooked through.
9.  Remove from heat and let it rest in the pan
a few minutes. I find it much easier to cut
when it has cooled a bit.
10. Take your golden brown masterpiece out of the pan,
cut into wedges and EAT! 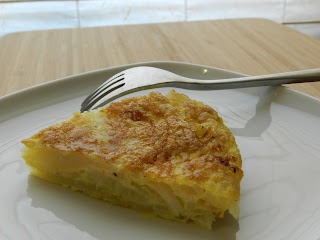 *leftover tortilla espanola is delicious on a nice baguette with a touch of mayo…  just fyi. 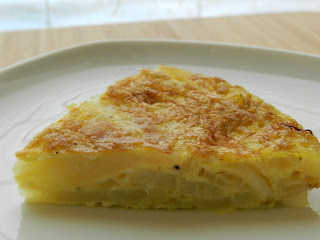