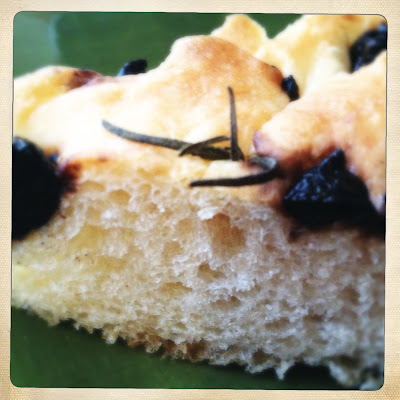 These basic four ingredients that most of us already have in the pantry plus a few other add ins and that’s all that is needed to turn a few basic ingredients into focaccia.

I had been thinking about making it for months, but for one reason or another talked myself out of it every time… until now.  I was thinking that it was such a hassle (it’s not) and that it would be a process (it hardly qualifies as work) to make it…  blah, blah, blah.   It had been awhile since I had made focaccia and I had just forgotten how ridiculously easy it is.

It is as simple as weighing some flour, mixing yeast & water and turning on a mixer.   I should be ashamed of myself for putting it off for so long, especially when it really is that easy.

If you don’t have a kitchen scale, a cup of flour weighs approximately 5 ounces.
There are 16 ounces in a pound, so therefore 1 lb and 4 ounces of flour is 20 ounces.  Divided by 5 gives you 4 cups of flour.  I used a little more than that.  I weighed my flour first and then measured it so I could give you the cup measurement and for me it came out closer to 4 and a half cups.

I know with all this math, I’ve probably just talked you out of weighing flour but it really isn’t all that bad.   Please forgive the math lesson and let’s get on with the dough…

If you aren’t a fan of olives (personally, I can’t even conceive of it), then use something else in place of them.  Caramelized onions or shallots are great on top of focaccia, you could also skip it all together and just use sea salt & herbs.

In the bowl of a stand mixer, combine flour and salt.
In a separate bowl, whisk water and yeast together, then add oil. 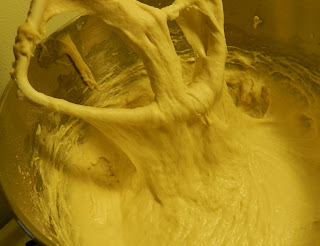 On low speed, add water mixture to flour mixture.   Mix for about 2 minutes until the dough is smooth and thoroughly combined.

Cover dough and allow to rise until doubled. 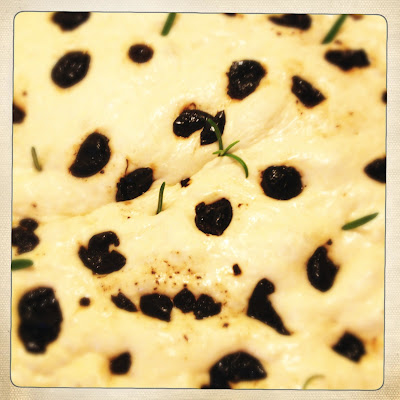 Turn dough out onto an oiled baking sheet and (with oiled hands) stretch dough into the pan.  Using your fingertips,  make indentations about an inch apart over the surface of the dough and add olives, rosemary and a sprinkling of coarse salt.

Cover with lightly oiled plastic wrap and let the dough proof until double. 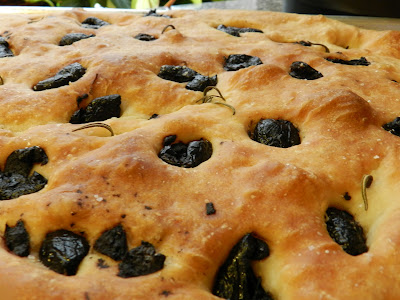 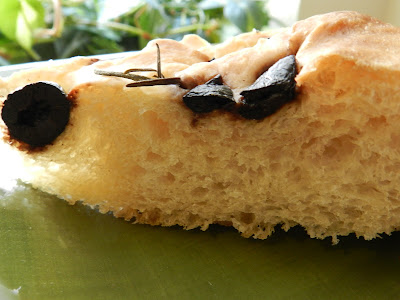 * for the oil in this recipe, I infused arbequina olive oil with garlic and rosemary, it imparts more flavor to the bread than plain olive oil.

Use the leftover oil for sauteing veggies, chicken, meat, etc…