Bread and butter pickles are a great gateway into canning your own pickles. It is an easy, straight-forward recipe that is perfect for beginners. Another simple recipe is my pickle vegetable, or curtido, recipe.

In the Midwest, and certainly other parts of the country, the end of summer marks canning season at it’s height.  This is when the air smells of ripe tomatoes being “put up”,  jars of preserves and jams lining the kitchen counter like a glass army of winter provisions…  cabinets and cellars receive the summer’s bounty before colder temperatures bring the first frost.

Canning may be a lost art form in other parts of the country,  but if you’re near an agricultural area you are very familiar with the process.

My step-dad & I used to do this as a two man operation…   It was a bit of an elaborate set-up.  There were two stoves working simultaneously, I was at one cooking the fruit and he was at the other sterilizing jars.
We’d meet at the halfway point for the hand off:
He’d sterilize the jars,  bring them to me piping hot,  I’d fill them and put the lids on then take them back out to him to process and seal.  We ran our operation like a well-oiled machine (he IS German, so there’s really no other acceptable way).

Bread and butter pickles have always been my favorite.  They are sweet and yet have a little bite from the vinegar and they remind me of my Grandfather, they were his favorite too.  I sometimes feel obligated to “Chef” it up a bit,  but at the end of the day I’m just a girl from Ohio and the simple, familiar things are what I crave.

For this recipe,  I used Kirby cucumbers that I bought at the farmer’s market.
The beauty of this is there are few hard & fast rules, but if you chose to use a different cucumber, make sure it is a pickling cucumber. 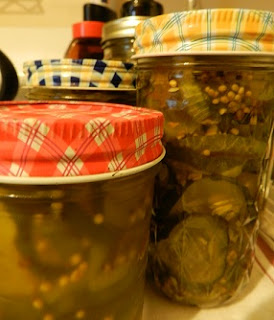 1.  Slice cucumbers into rounds,  the easiest and fastest way to do this is with either a food processor or a mandoline.   I have an inexpensive Japanese style mandoline that I use and it works perfectly.  A mandoline or food processor will ensure that the slices are uniform and you’ll be done in a fraction of the time it takes to slice everything with a knife.

2. Combine sliced cucumbers, sliced onions and crushed garlic with salt in large bowl and toss to coat evenly with the salt.  Cover with ice cubes and let stand.  The purpose of this is to pull some of the moisture out of the cucumbers.  The salt will leach the liquid out of the cucumbers and onions helping them to retain a crunchy texture.  They can stand anywhere from 3 hours to overnight,  but patience is not a virtue I possess, so 6 hours was my limit.

4. Drain the cucumbers and rinse if you like.  Discard the garlic.  (Salt & I are very good friends, so I chose not to rinse mine, but if you two aren’t as close perhaps you’d care to rinse some of the salt off before you proceed).

5.  Combine the vinegars, water, sugar, turmeric and pickling spices in a large pot.  Bring to a boil,  then add in cucumbers and onions.  Return to a boil and then shut off.  Do not boil the cucumbers, get the liquid back up to the boiling point and then immediately turn off the heat.

6. Ladle pickles into glass jars, leaving about a 1/2″ space on top and put the lids on.  Do not tighten the lids to the point that the air can’t escape from the jar, but tighten enough that water won’t go pouring into your pickles.

7. Carefully lower them into the pot and process.  I had a few different sized jars, so I pulled the smaller ones out at 10 minutes and left the large ones in for another 5 or 10 minutes after that.  If you do not have special “canning” tongs that are coated with rubber, make sure to wrap a dish towel around your metal tongs when removing the jars from the hot water.  (don’t take a chance on chipping or cracking the glass).

8. Leave them to cool on the counter, step back and swell with pride at your creation. 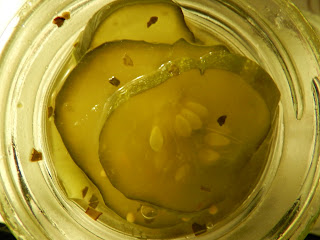